So the guy many observers think is better than Jason Heyward has made the majors. Florida has promoted 20-year old Michael Stanton, the leading home run hitter in the game, and presumably he will make his major league debut on Tuesday – just as Stephen Strasburg makes his.

The question is: who loses their job in the Marlins’ lineup? Stanton is a corner outfielder, but Cody Ross can play an adequate centerfield. The assumption has been that the odd man out is the current occupant Cameron Maybin, and in that equation is the eternal caveat about the can’t-miss-prospect. Cameron Maybin has/had been that guy for nearly four seasons.
Maybin in the Dustbin of History might not be an automatic, however. There are other options for Florida, and it will be intriguing to see if they try any of them. Leftfielder Chris Coghlan has just awakened from his slumber of the season’s first seven weeks, and has infield experience. Putting him at third or second and leaving Maybin and Ross where they are, shifting either Jorge Cantu or Dan Uggla to first in place of the flaccid Gaby Sanchez, might actually improve the Florida defense, to say nothing of the offense.
WHICH PITCHING STATISTIC WON’T LAST?
Ubaldo Jimenez is a tidy 11-1 through his first twelve starts. He made the average number of starts last year, 33, and if he can match that, statistical projection has him finishing up at 30-3. This is why statistical projection is crap, but fun.
Just as entertaining is the line of Mitch Talbot of Cleveland: 11 starts, 7-4, 32 strikeouts. This extends out to a record of 21-12 with 96 K’s. If Mitch Talbot can win 21 games (and stay in all  his starts long enough to get a decision in every one of them) with just 96 strikeouts all season, he should get the Cy Young Award, the AFC Defensive Player of the Year, and The Lady Byng Trophy.
Still, the weirdest numbers a third of the way through belong to Tyler Clippard of the Nationals. If the Yankee castoff were to continue his current pace, he would end up with about 106 innings pitched in relief, featuring 123 strikeouts, 22 wins, 8 losses, 34 holds, and 14 blown saves. I’m not sure if those numbers would put him in the Hall of Fame or AAA, but you needn’t worry – Jimenez and Talbot’s projections seem likely by contrast.
PHOTO OF THE DAY: 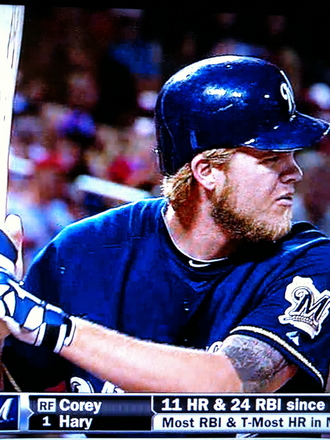 This is why being a graphics operator might be the most difficult job in television. You rarely have an editor, and very often you’re working on the road in a smelly, crowded truck, that might have the air conditioning sputtering, and the room is full of idiots shouting and spilling sodas and corndogs all over your console and whining about management and then shutting up when management suddenly walks in and before you’ve noticed it you’ve finished typing up all the Brewers’ names into their templates and you’ve made sure you put the second “l” in Counsell and that you haven’t typed in “Carlos Villauneuva” and you’ve double-checked whether Braddock is “Zach” or “Zack” and then there goes another corndog and the manager leaves and that one guy starts whining again about his per diem and before you’ve known it you’ve looked at the beard and typed in “Corey Hary” instead of Hart.
FROM A RESEARCHER’S NOTEBOOK:

Other than perhaps the untouchable king of the hill, onetime pitcher Eugene Hamlet Krapp, this gentleman to the right might have the best full name in baseball history. He is the late Joe LaFata and he was a pretty nondescript lefthanded bat off the bench, playing some first base and a little outfield for the New York Giants in 1947 and 1949 (and for one game in 1948).
He is something of a mystery, and not just for the fact that even in the minors he never cleared 14 homers or a .289 batting average in a single season. He is a mystery because all his records agree: his first name was Joseph, and his second name was… Joseph.
Joseph Joseph LaFata.
Of course, Eugene Hamlet Krapp’s nickname was “Rubber.”