Kudos to the Red Sox for taking the concept of the mega-ceremony to a new level. Whereas the Yankees closed the old Stadium in 2008 by putting a comparatively small group of all-time greats on the field at their old positions, the Olde Towne Team went the egalitarian route, and for once, bigger really was better.

The ovation for Terry Francona was terrific, and the scene of Tim Wakefield and Jason Varitek pushing the wheelchairs of the long-ago doubleplay combo of Bobby Doerr and Johnny Pesky was indelible. But to me, just as important was seeing Bobby Sprowl and Billy Rohr and Wayne Housie and Jim Landis and those other dozens of the 230 in attendance whose Red Sox tenures were more cameos than careers.

This is the essence of the difference between the franchises. The Yankees are about an elite, and a sense that only the best even matter. The Red Sox – at least until ownership went crazy last fall and cut off its nose to spite its face – have always been predicated on the idea that everybody, great or trivial, has contributed something to the heritage.

I will protest, however, on behalf of historical accuracy, the continual references right now to how the opponents in both today’s game and the first ever at Fenway exactly a century ago were the New York “Highlanders.” This is one of those misunderstandings of history that never seems to get straightened out. Yes, the New York American League team was colloquially known as “The Highlanders” when it was moved from Baltimore in 1903. And yes, the name “Yankees” wasn’t formally adopted until 1913.

That does not mean the 1912 New York team wasn’t known as the Yankees. In fact the name was in common use no later than 1907. Evidence?

That is a postcard advertising the following Sunday’s edition of The New York American newspaper, which was to include a full-sized version of the 1907 Yankees team picture. This was just after 1907’s opening day, five years before the christening in The Fens.

They were the Yankees. Not the Highlanders. Stop saying it.

Update: Yes, I understand that the Yankees’ official history identifies the pre-1913 teams as the Highlanders and doesn’t assign the “Yankee” name to the teams until after the 1912 season. But this isn’t about a simplified record for people who don’t really care about historical accuracy (another example: the Dodgers claim their franchise began in 1890, when in fact the 1890 team was the same one that represented the old American Association in the 1889 World Series). This is about what the fans at brand new Fenway Park, a hundred years ago today, would’ve called the visiting team from New York.

Second Update: As those who never question “history” continued to push back on this idea that because the team didn’t officially call itself the Yankees until 1913 it wasn’t the Yankees in 1912, I decided to go back to where I first heard the story of the slow evolution from “Gordon’s Highlanders” (the name of a famed British army regiment of the time, which stuck because the first team president was named Joseph Gordon, and because their ballpark was at one of the highest spots in New York) to the Yanks. Frank Graham wrote his first version of The New York Yankees in 1943, when a lot of people who had seen the full 40-year history of the franchise were still alive – Graham, who became a sportswriter in 1915, included. I read the copy my father had had since childhood, either in 1967 or 1968.

The relevant passage is on Page 16:

“With 1913 coming up, there was an almost complete new deal. Jim Price, Sports Editor of the New York Press, had been calling the team the Yankees because he found the name Highlanders too long to fit his headlines; and by 1913 the new name had been generally adopted.”

So the Yankees were the last people to call themselves the Yankees and as Graham wrote nearly 70 years ago, the nickname had been generally adopted before the club went through the formality – in 1913.

Some of the less in-the-know fans at Fenway at its christening might have referred to the visitors as “The Highlanders.” The vast majority would’ve said “Yankees” – as the New York Times had after the 1912 opener in New York: “The Yankees presented a natty appearance in their new uniforms of white with black pin stripes.”

More evidence? In the biographies on the back (as shown in the lower left hand corner), there are occasional references to “Highlanders.” But the 1911 baseball cards refer to them – unofficial or not – as the Yankees: 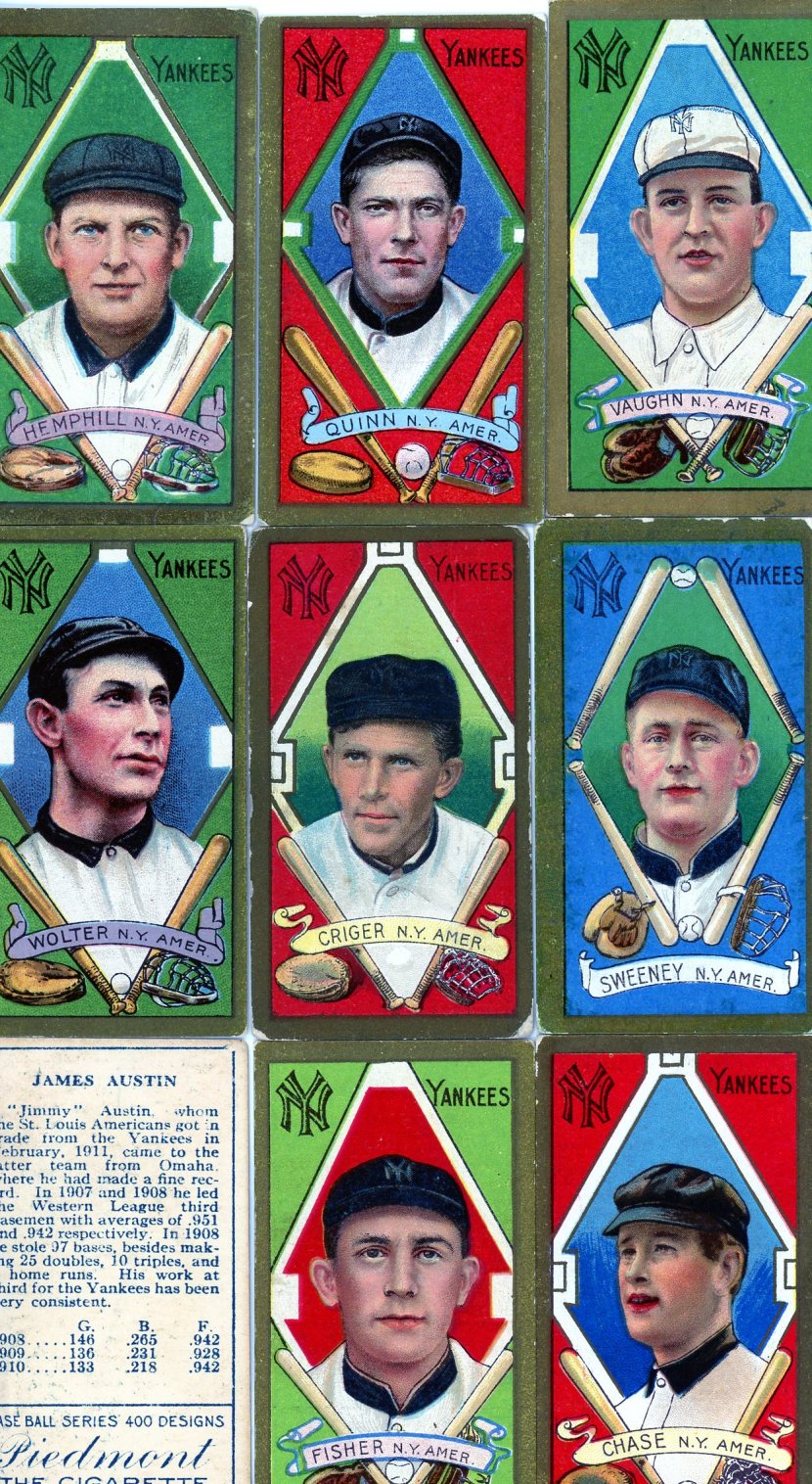 By the way, “Quinn” in the top row? That’s Jack Quinn, whose oldest-victory mark was just broken by Jamie Moyer. These are 1911 cards. Quinn is also in the 1933 set.

In point of fact, the Yankees were the Yankees before the Red Sox were the Red Sox. Created in 1901 when the American League was founded, the Boston team was known variously as the Pilgrims, and simply “The Americans” (as opposed to “The Nationals”), the new team drew much of its talent from the successful, but eminently cheap National League team in Boston. From its earliest days in the National Association (1871) and N.L. (1876) that team had worn red stockings, and were once formally known by that name.

In 1907, the N.L. team’s manager Fred Tenney became worried about the threat of blood poisoning supposedly posed by the red dye in the socks getting into spike wounds. By year’s end, he had convinced owners John and George Dovey to eliminate the color from the uniforms. A block away, where the nascent A.L. team was struggling to gain a foothold in what was still a National League town, owner John I. Taylor immediately jumped on the opportunity and announced his team would don “the red socks” in 1908 – and a name was born.

Parenthetically, the N.L. team’s next nicknames – the Doves, for the Dovey Brothers, and, in 1911, the Rustlers (because Doves increasingly sounded stupid) – didn’t catch on. The Doveys sold out in 1912 to a bunch of New York politicians from Tammany Hall. Since that organization had a Native American for its logo, its operatives were known as “braves” – and thus the Boston N.L. club adopted that name, and have carried it since. In fact, a week ago Wednesday was the 100th Anniversary of the first appearance of the Braves.