If you ever needed a freeze frame on the volatility of closers, you’re seeing it in Washington right now. Joel Hanrahan lost the job quickly, but not as fast as Manny Acta’s closer-in-waiting Garrett Mock. Instead we are told to expect a committee consisting of Julian Tavarez and Kip Wells. Until next week when Joe Beimel will come off the disabled list and either “join the mix,” or supplant those co-closers. And don’t forget that a year ago today, Chad Cordero was still active and supposed to eventually swap jobs with his impermanent replacement Jon Rauch.

It is not just franchises in chaos that remind us of how, if all managers are interim, then all closers (except, perhaps, Mariano Rivera) are temporary. Since Bobby Cox returned to the helm in Atlanta in 1990, this has been the succession (and I’m deliberately ignoring a couple of “closers for a week” like Joe Hesketh).

And they won stuff during that merry-go-round. Moreover, Gonzalez is formally Cox’s closer at the moment. Yet only last night did he pull out of a tie with Soriano for the team lead.

LOOK-ALIKES
Well here’s the oldest time-waster by a blogger: ballplayers who look like actors. But I think three of these are new; certainly two of them are bizarre. 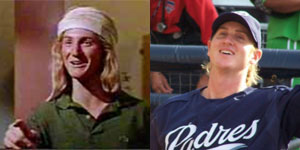 Khalil Greene and Sean Penn as Spicoli from  “Fast Times At Ridgemont High” – observed first, I think, long before Greene made the majors. 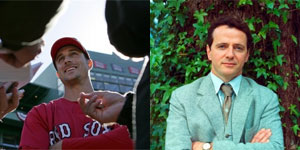 But what about Rocco Baldelli of the Red Sox and the actor Aidan Quinn? 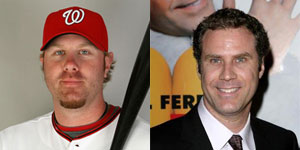 This one jumped off the scoreboard at the Mets-Nats game Saturday. The new official publicity photo of Adam Dunn, and Will Ferrell? 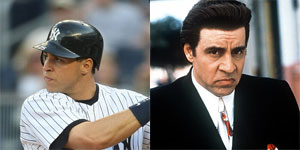 And my favorite, applying only when he has that lip-curl snarl while at bat, somewhat enhanced by the Yankee colors: Mark Teixeira and Little Steven Van Zandt in his “Sopranos” role of Silvio Dante?

I have been pleading for a week for somebody to identify the “classical music” used by the Yankees during their otherwise tedious scoreboard “Great Subway Race.”

Did you know Danny Elfman was a famous 17th century classical composer?