It would be a brilliant stroke in terms of stealing some of the Cubby fan base, but it comes up against two realities. The Cubs themselves will probably be looking at Ryno again (and everybody else) this winter after the unhappy realization that Mike Quade is a great guy and a great baseball man but not a long-term Cub manager. Meanwhile, Sandberg – judging by his prominent in-dugout role in Spring Training and September – would appear to be Charlie Manuel’s heir apparent in Philly if he wants to wait that long.

He might. The Cubs have to be looking closely at the FenwayPocalypse – the tendency to panic in Boston is decades old and burns below the surface of recent success. It is just the kind of place to run either Tito Francona and/or Theo Epstein out of town and either or both to say ok. As the great Boston sportscaster Clark Booth told me 25 years ago, you have to remember that the fan mindset is simply this: if the Sox win today, it’s only because losing tomorrow will hurt MORE.

Lastly I’m not so confident about Ozzie Guillen in Miami. He is the perfect Marlins manager – for the fans. For an owner who found Joe Girardi too filter-free? Every night could be fireworks night in the new ballpark.

Thanks to the telecasts of the Cubs-Marlins by Fox Sports Florida and the superb DVR service of MLB.Com’s MLB.TV, we get a good, albeit blurry image of the incident this afternoon in Florida in which Cubs’ rookie outfielder Tyler Colvin suffered a season-ending partial lung collapse when he was in the chest speared by a large shard of the broken bat of teammate Wellington Castillo: 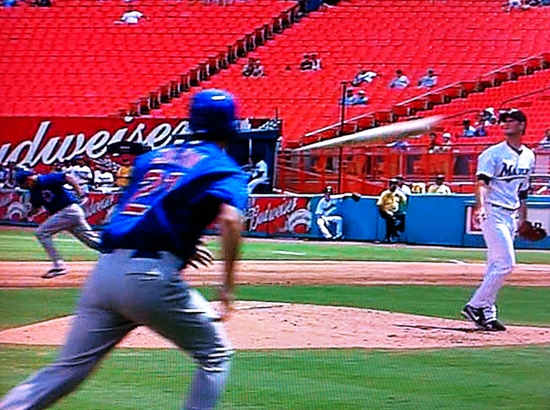 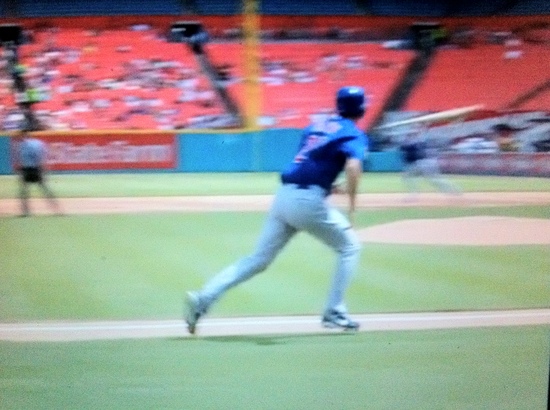 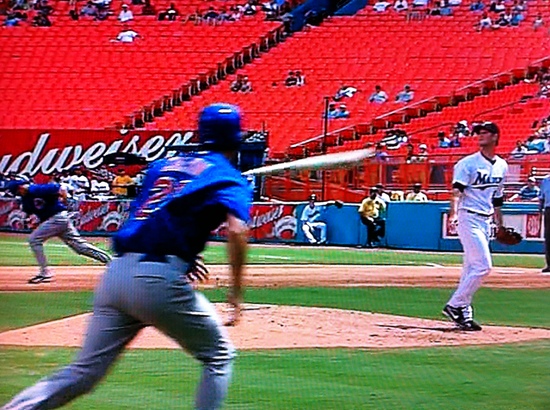 (C) MLB, FS-F, WGN-TV
Paul Sullivan of the Chicago Tribune reports that the lack of blood or evident superficial damage hid a truly dangerous outcome: Colvin is being preventively treated for the possibility of a collapsed lung:

He’s being treated for pneumothorax, a puncture of the chest cavity, which allowed air into the chest wall and the potential of a collapsed lung. A tube was inserted into the wound, and Colvin is resting comfortably, but will remain hospitalized for 2-3 days for further examination, and manager Mike Quade said he will not play again this season.

There has been at least one occasion in baseball history where a broken bat shard has struck a player, but that was with a batter in the on deck circle. Bill Russell’s bat shattered and a piece hit his Dodger teammate Steve Yeager in the neck, actually piercing Yeager’s esophagus. Yeager required more than an hour-and-a-half’s surgery, and the injury led to the creation of the “throat flap” that would protect a catcher from a shard (or ball) injury to the same area. But there has never been any innovation to protect any other player on the field and that Colvin’s injury is the first of its kind in recent memory – especially in this day of easily-shattered maple bats – is truly extraordinary.
The gruesome images conjured up by the initial reports of Colvin being “rushed” to the hospital after having a broken bat “stuck” in his chest are fortunately not the reality, though these screen captures give an idea just how close a call this really was:
ALL PHOTOGRAPHS COPYRIGHT MLB, WGN-TV, CHICAGO CUBS: 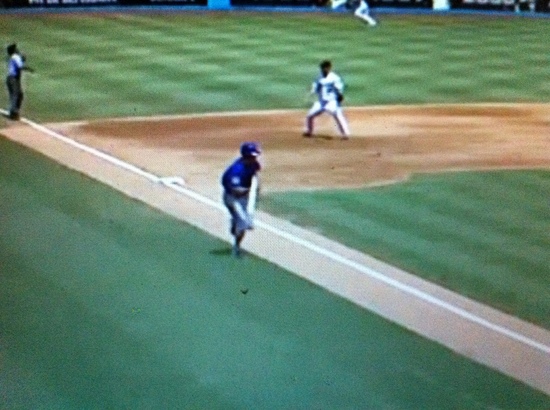 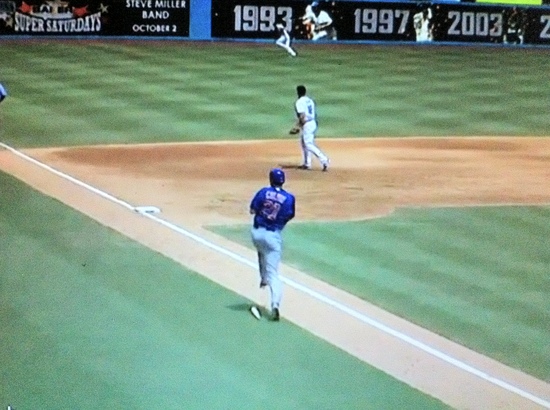 With only 13 games left in the season it appears unlikely he will play again this year. Colvin is tied for the major-league rookie lead with 20 homers. 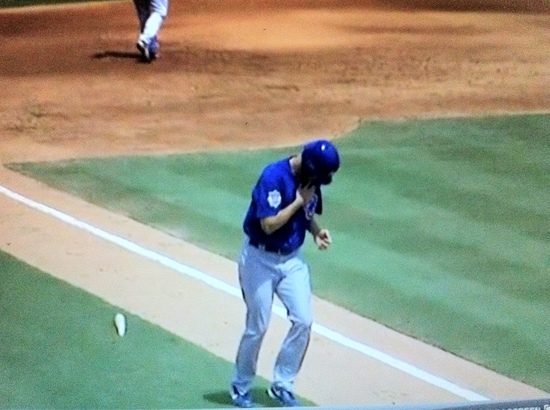 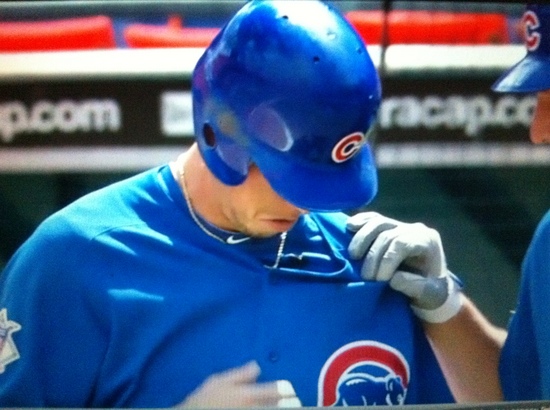