In what is easily the best piece of baseball research – and possibly motion picture research – this year,  Senior Curator Tom Shieber of the Baseball Hall of Fame dispels one of the most enduring myths of both fields: That the right-handed Gary Cooper donned a backwards-lettered Yankees uniform and ran the wrong way around the bases to enable  filmmakers to flip the negative and make him look like the left-handed Lou Gehrig in “The Pride Of The Yankees”: 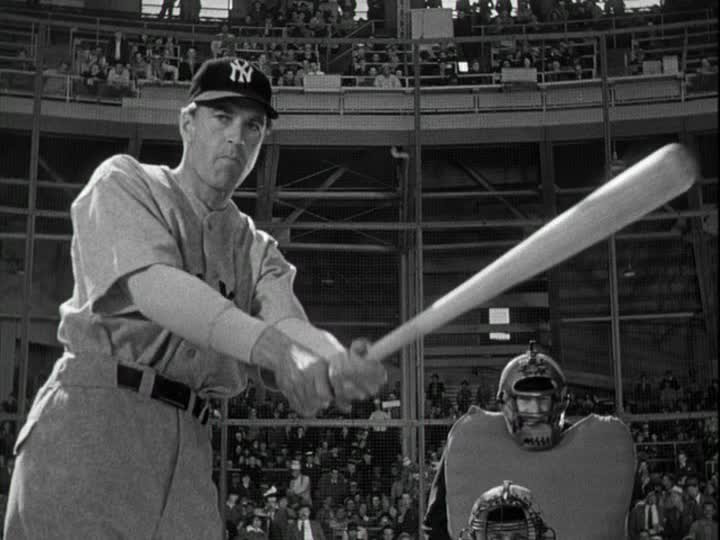 I’ll let Tom Shieber take you step-by-step, with a kind of gentle meticulousness that even I could understand, through the evidence that:

A) Proves the shot of Cooper above is not a reversed image and he didn’t hit the ball and then run down the third base line;

B) Proves that such movie-making sleight-of-hand would not have been necessary;

C) Proves the one instance – in a pre-Yankee scene from the Gehrig biopic – in which they really did let Cooper do things righty and then flipped the image to make him look lefty;

D) Nails the explanation of how this one instance was blown out of all proportion and turned in to the backward film legend by a very venerated but very overrated sportswriter;

E) Proves the involvement in the making of the film by two of the game’s great characters, Babe Herman and Lefty O’Doul.

F) Notes and explains why the rightfielder in some of the shots appears to be playing about 20 feet behind the first baseman. 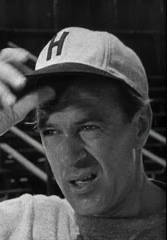 It is, as I say, terrific research terrifically explained.

I can add only one detail to it – something that had always bothered me about the ‘then he ran down the third base line’ legend. The human face is not symmetrical. We know this so intuitively that we don’t usually even think about it. But you know when a picture of you has been reversed, or you’re looking in a double mirror.

This is not as exact a science as Shieber’s analysis of stadium backgrounds and fly buttons and all the rest, but it’s of supportive value. And except in this one scene, Gary Cooper looks like one Gary Cooper all the way through the film. As 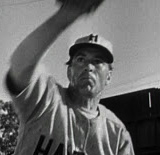 ‘another’ Gary, Garry Shandling, used to say, ‘no flipping.’

Then in this one scene at first base comes this bizarre image of a guy who looks enough like the Cooper we’ve seen throughout the flick to be his twin – but it is not an exact match. The nose breaks in the opposite direction (just a little bit). The veins on one side of the neck now match the ones on the other side of the neck. It’s all subtle, but it’s all the photographic equivalent of circumstantial evidence.

And it puts a little P.S. on some superb detective work. Bravo, Tom Shieber