The comparisons have been made for years, and tonight one of them comes true. Like Mickey Mantle, Bryce Harper will make his major league debut tonight, slightly out of position, and at the same age – 19.

Dismissing for the moment the relative validity of the comparisons of the players, something startling dawned on me this afternoon. We all know Mantle broke into the majors at Yankee Stadium on April 17, 1951, batting third and playing in right field (and wearing number 6) and grounding out to second base in his first at bat against Bill Wight of the Red Sox. Mantle would go 1-for-4 and notch his first of 1509 career RBI on a single that plated the third run in a 5-0 shutout by Vic Raschi.

But that wasn’t Mantle’s first game in New York as a bona fide member of the Yankees – and that’s where the startling part comes in.

That’s exactly what it looks like. Mantle posing with Joe DiMaggio – at Ebbets Field in Brooklyn. The date is Saturday, April 14, 1951 and it’s part of the annual pre-season exhibition games the Yankees and Dodgers used to play. The seriousness of these games (though they didn’t count) is evidenced by those patches on their left sleeves. It’s the 50th Anniversary of the founding of the American League and the patches were brand new. Mantle has just gotten off an overnight flight from Kansas City, having just again been classified as medically unfit to serve due to osteomyelitis by yet another draft board. DiMaggio played CF and Mantle RF, and in the second exhibition, on Sunday the 15th – as Jane Leavy reports in her epic biography The Last BoyMantle merely went 4-for-4.

Update: This was not just Mantle’s first game in New York, it was also his first game in a Major League stadium. In 1951 – and only in 1951 – the Yankees spent spring training in Phoenix. There were no big league parks west of St. Louis then, and when the team began the “tour” that annually preceded the regular season (and to some degree still does) it went west to places like Seals Stadium in San Francisco. On March 26, 1951, Mantle hit a home run at USC’s field that went at least 550 feet, possibly as much as 600. But then came a letter from the draft board and Mantle had to leave the Yankees for nearly two weeks.

Note what’s painted onto the press box level in the fabled Brooklyn ballpark. WMGM was the Dodgers’ radio flagship station (at 1050 AM, it had been, and would again, become WHN). But it was just an exhibition game. Would Mantle’s debut have even been on the radio that day?

OK, so I can’t find the television listings for April 14th.

But there you have it: at minimum, Mantle’s first game ever in New York, on Saturday April 14, 1951, was broadcast by the Yankees’ station (WINS, with Mel Allen and two new colleagues who were replacing Curt Gowdy, named Bill Crowley and Art Gleeson), and was also carried by the Dodgers’ station, WMGM, with their announcers.

Red Barber on the left, then beginning his 13th year in the Brooklyn booth. In the center, Connie Desmond, Barber’s sidekick since 1942. And on the right, the kid, the local fellow who had just joined the team in the middle of the prior season…Vin Scully.

Updating: I asked my old friend (and my second boss) and Dodgers’ broadcaster Charley Steiner to check with Vin this evening to make sure he didn’t have that weekend in 1951 off for some reason. Vin says he has no recollection one way or the other (I mean, it was at least 10,000 games ago) but doesn’t think he wouldn’t have been working the exhibition games, especially the ones in New York, and recalls doing so throughout that era. So I think it’s safe to say that Vin Scully broadcast both Bryce Harper’s Major League debut tonight, and Mickey Mantle’s first game in New York just 61 years, and two weeks, ago!

By the way, one more relic. Just in case you get to go back in time, print this out:

Wow. Vin Scully has had an amazing career, and is still going. He really is amazing. Thanks, Keith!

And Scully’s first-ever Dodger broadcast was a 1950 spring training game against the Philadelphia Athletics, managed by 87-year-old Connie Mack. A man whose MLB career began in 1886, covered by a man who’d be announcing MLB games in 2012.

I loved the way you pulled it all together, but what amazed me was the first picture. Another of my idols in baseball Joe D. I knew his niece-in-law Annie. This is a great piece and to tie it together with the Great Man Vin Scully is truly fabulous. Thank you BB man. LyK

KO, when are you going to write a book of awesome baseball history anecdotes, like this one? I’ll put in a pre-order now.

Keith, your baseball blogging has been outstanding this season. Clearly, writing about something you are passionate about agrees with you. Thank you for sharing your joy of baseball and reminding me, at least, why I love this game!

Keith, a minor correction. The Vin started the 1950 season with the Dodgers. It was Ernie Harwell who came up at mid-season in 1948 when Red Barber had a bleeding ulcer. Harwell took the Giants job for the 1950 season and that is when Red sent “Young Scully” to interview with Branch Rickey, who hired him.

But what an incredible story! And I have been listening tonight, and he included that Harper’s number, 34, reflects his admiration for Mantle, but 7 is unavailable, so he took what added up to it.

Keith, if you read this, I have been able to find the television listings in The New York Times. The April 14 and April 15 Dodgers-Yankees games aired on WOR-TV-9 in New York. The rule the Dodgers had then was that they televised all home games, using all three announcers, but did not televise road games, so usually only two of their three announcers made the trips. When they televised, Barber decided who did what innings where, so quite often “Young Scully” got the TV side, since that was less important and he was the third man in the wheel. In any event, barring something unusual, Vin Scully broadcast the two games that Mantle played against the Dodgers.

Wow! I wasn’t yet a twinkle in my dad’s eye on that day in 1951. Oh, to go back in time! We all love it! Seeing those two American hallmarks as kids was the first treat. Then, seeing Vin Scully as a youngster, too! Who knew? Why does it seem like the legends were always BIG and BOLD? In reality, they are forever young! Our admiration for them keeps them vibrant and alive! Essence lives forever! Thanks, Mr. O. I will try not to trip as I exit the time machine that is this blog!

Vin Scully (if it was possible) just became even more epic. Thank you for a thoughtful piece about two legends, and one future legend.

And throw in that anybody who had MLB Network outside the Dodgers coverage area got to hear Vin do the game, all alone, without a color man explaining every play and talking about his golf game. Baseball as it was meant to be.

Talk about obscurity and Mantle. On October 12, 1958, a wee lad, me, attended perhaps the most uncovered event in Mantle history….. an exhibition game… after the 58 world series featuring the “Mickey Mantle – Willie Mays All stars” !!!!

The game was played at Yankee stadium

I don’t have a clue as to who staged this (or why) but it was touted by one Julie Isaacson. As I recall (dimly) Mays and Mantle picked the players. Among the “All Stars” were Gus Triandos, Billy Martin, Rocky Colavito, Bill Mazeroski, Irv Noren, Lee Walls and Bob Friend. I have been searching for years (in a rather sucessful effort to waste time and avoid writing scripts) to find out more about this phantom game. About the only thing I uncovered was a small newspaper article which I posted on Flickr. The url is: 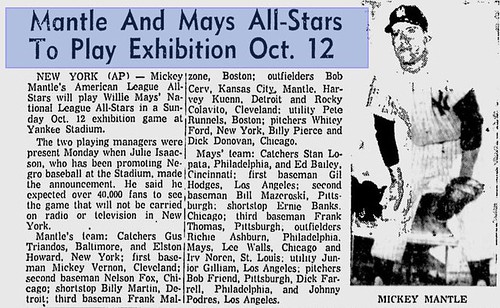 If anybody (Olbermann) knows more about this game, please let me know. For all I know Judge Crater was in attendance.

I smile when I hear UPDATE as I think of Weekend Update on SNL. The “line-up” of Mr. Mantle and Mr. Harper with Vin Scully is more than serendipity…they are “The Three Princes of Serendip”!

Had to post, especially after reading the one by Patricia just above me. 🙂 Reading about Vin brings back fond memories of Chick Hearn during those golden Laker days when Magic and Kareem ruled the Forum (even before it was called “Great Western”). Speaking of Magic (ahem) there are many LA fans out here hoping for good things from the Dodgers this year, hoping all that divorce nonsense is behind us. Enjoy geeking out on your beloved baseball, Keith. Hope all is well with you, gruffy face. 🙂

You are a doll, Regina. Good ol’ days are just so full of pixie dust! I love them, too! Yes, the Dodgers are good to go now! Seeing them all hopping like the Easter Bunny in that circle was so exciting this past weekend. What larks! You are one brave woman…calling the Baseball Nerd himself “gruffy face”…I guess it is okay to have stickers and eat garlic as long as you are not kissing anybody that day. 😉

Vin Scully is a poet. Here’s a gem from yesterday: “distress signals obvious as Washington struggles to find a run.” Totally spontaneous use of alliteration and fascinating rhythms, all within the context of the game, delivered in that legendary voice. The Sinatra of announcers.

Don’t sell yourself short, Sam! YOU are quite the poet yourself! Thanks.

I asked Vin about this today at the Dodgers’ ownership press conference. He said: “Back then, I was the third announcer (with Red Barber and Connie Desmond) and probably only worked the third and seventh inning. Honestly, I don’t remember exactly how that went, except that I did wonder how a kid from Commerce, Oklahoma could possibly play in cavernous Yankee Stadium before crowds 10-times larger than his own hometown.”

Taking a closer look at that ticket, I wonder why there’s a 25% Federal Tax on baseball tickets. Must have been Harry Truman’s fault.

It is indeed my belief that mesothelioma will be the most dangerous cancer. It has unusual properties. The more I look at it the greater I am assured it does not respond like a real solid human cancer. In the event that mesothelioma is usually a rogue viral infection, then there is the chance for developing a vaccine plus offering vaccination for asbestos subjected people who are really at high risk of developing upcoming asbestos associated malignancies. Thanks for expressing your ideas for this important ailment.

I do afree with all the ideas you’ve offered for your post.
They’re very convincing and can certainly work. Nonetheless, the posts arre very brief for beginners.
Could you please lengthen them a little frrom next time?
Thanks for the post.

My dad took me to that game, my first game ever,sat behind first base and saw so many hall of gamers that day